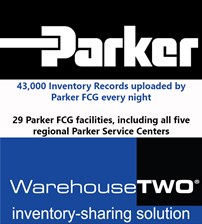 Great news for Parker Hannifin distributors who utilize WarehouseTWO and TrulinX. Effective immediately, all five divisions of Parker’s Fluid Connector Group (Parker FCG) now upload their finished goods inventory to WarehouseTWO every night. Previously, Parker distributors had to log into either one of two systems ― PH Connect or TOPS ― to perform Parker FCG factory stock checks. Now, they can quickly and easily search from within one user interface: TrulinX.

How it All Got Started

In 2012, the idea of “advanced inventory-sharing” was first put into play with the initial development of WarehouseTWO’s integration with TrulinX, involving several Tribute customers, including Connector Specialists (CSI). Once the functionality was defined, programmed into TrulinX and proven successful, CSI started thinking more broadly about how this enhanced functionality could be used to improve access to manufacturer-owned inventory data.

With TrulinX’s “inventory-sharing” enhancements in place, the idea of integrating Parker Service Center (PSC) inventory data into the WarehouseTWO application came to CSI’s mind. Alex Wheelock, President of CSI, said, “Integrating the Parker Service Centers data would give us the ability to see the entire Parker channel inventory in one screen, which creates a very powerful resource for WarehouseTWO/TrulinX users.”

Operations managers from Parker FCG then visited the CSI facility where they were pitched on the idea of uploading Parker-owned inventory data to the WarehouseTWO system. As they toured the CSI warehouse, one of the Parker visitors took notice of a large, non-standard, stainless-steel, jump-size crimp fitting in CSI’s warehouse. He immediately pointed out that they had just disrupted their production schedule the previous week to make that exact fitting when there were four of them on the shelf of one of its distributors (CSI). Wheelock said that’s when Parker FCG finally understood the value of having visibility of its distributors’ inventories.

WarehouseTWO is the leading inventory-sharing tool utilized by Tribute customers and integrated with TrulinX software for optimal use. Created exclusively for manufacturers and their wholesale channel partners, WarehouseTWO has partnered with Tribute to make the process of viewing inventory available in a manufacturer’s wholesale channel as seamless as possible for our customers.

While WarehouseTWO’s Mark Tomalonis has spoken highly of the way Tribute, compared to other ERP software providers, has embraced importing data from WarehouseTWO, the feeling is completely mutual. Bill Horrigan, VP of Sales and Marketing at Tribute, said, “Our relationship with WarehouseTWO and Parker is a testament to the great results that can come out of partnering with ‘Best in Practice’ vendors and manufacturers whose primary goals are to streamline business processes for their customers.”

WarehouseTWO’s integration with TrulinX provides many benefits to distributors, including:

The screenshot below represents an example of this new data appearing in TrulinX.

For more information on WarehouseTWO and successful inventory-sharing, visit the WarehouseTWO website or inquire at info@warehousetwo.com, or contact Jeff Waite, Customer Relationship Manager, at Tribute, Inc.

Stay up to date on the latest industry trends and learn more about industrial distribution and Tribute’s ERP software solutions. Check out our blog today!